Limited on-campus operations through May 31. Find campus messages and details on the University’s COVID-19 page. 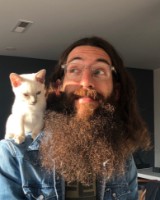 Nick Scandy has been with San Francisco State University since January 2019 as a lecturer in Electrical Engineering.

He received his B.S. and M.S. in Electrical Engineering from the University of Michigan and has been working as an applications engineer at Texas Instruments since 2008.  His technical interests are in analog technologies such as temperature sensors, current sense amplifiers, operational amplifiers, port power protection, and linear power.  He has been instrumental in the product direction of 30+ Texas Instruments devices in the personal electronics space and was elected TI Member of Group Technical Staff in 2017.

Outside of the office and/or classroom, Nick spends his time as one half of the San Francisco band mini and the Bear and as a co-host of Books of Some Substance, a classic literature podcast featuring interviews with fiction writers and Bay Area academics from Stanford, USF, SFSU, and UC-Berkeley.