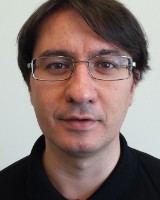 Dr. Selim Gunay completed his Bachelor of Science in Middle East Technical University in Turkey in 2000. Then, he earned his M.S. and PhD degrees from the same university focusing on earthquake engineering in 2008. Since then, he has been working as a research scientist at the University of California, Berkeley. He is conducting research on several aspects of earthquake engineering, including large scale testing, shaking table testing, hybrid simulation, performance-based earthquake engineering and nonlinear dynamic analysis of bridge and building systems. In recent years, he participated in several projects including machine learning, structural health monitoring and energy efficiency. Dr. Gunay is actively involved in the operation and research activities of the Pacific Earthquake Engineering Research (PEER) Center. Dr. Gunay occasionally teaches courses at the University of California, Berkeley and the San Francisco State University.